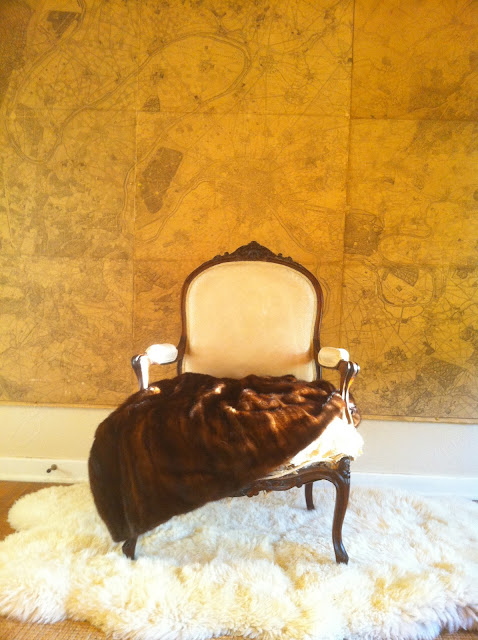 The pre-post revolution evolution of the French Chair 1740 to 1998
Now we admit this is a very abbreviated history, but we are only using what we have on hand.  The chair above is generally thought of as a Louis XV.  It first came into fashion during the reign of King Louis XV.  He held the throne from 1715 to 1774 or from age 5 to 64, but did not actually rule until 1723 when he turned 13.  When someone says French chair, I believe, this is the one that first comes to mind.

People that analyze chairs, feel the curves and graceful lines of this one symbolize romance, love and sensuality.  The time of it's creation was a pretty bleak period in France so these same analyzers add that it represents people's need to create and hold onto something beautiful even in dark times and further add that it speaks to the human capacity to persevere through adversity.  At least in the sensual regard, it is fitting that this chair holds the Louis XV name, for even though King Louis was not considered to be a great king and was never as loved as this chair has been, he found ample time for sex.  There was a family with five sisters, four of them were his mistress, as was the Marquis de Pompadour, who first popularized the pompadour hairstyle, an O'Murphy from Ireland and countless others that will remain unnamed.  The four out of five sister thing, of course, elicits one of two obvious responses, I might say, "Wow! I wonder what was up with the fifth sister."  Whereas, Heather would undoubtedly say,  "Well, at least one of them had some sense!"

If things were pretty tough for the French people they were remarkably bleak, through no fault of his, for those that stood between Louis and the throne, three deaths from smallpox, one from bloodletting, one from a broken- heart, one a hunting accident and one from gangrene.  All in all, historically speaking, his reign was not terribly noteworthy and is remembered more for the furniture created than for anything achieved by the monarch.

This particular chair is late 1800's and came to us via a friend that dumpster dove for it.  We love it.  It needs to be recovered, but, so what, it works.  The beauty of this chair is it works in any home, in just about any condition.  Truly a foundation chair. 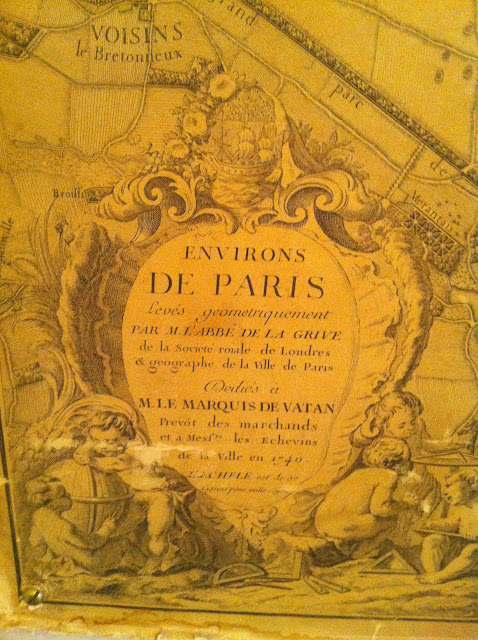 The map behind the chair is entitled, Environs de Paris and was also from the time of Louis XV.  It was created in 1740, by an abbe turned cartographer for the M. Le Marquis de Vatan.  The map was found at a Paris flea market in the 1960's by renowned northwest architect Roland Terry (check out his work if you haven't) was then acquired by a fantastic artist, James Wegner, that we will write much more about at a later date and, finally, came to rest in our home.

In 1740 when this map was created Napolean's birth was still 29 years away.  U.S. independence was still 36 years in the future.  The French revolution would come in 49 years.  Thomas Jefferson would be born in 3 years and would first arrive in Paris in 44 years.  The Eiffel tower would be built 149 years later, but what is there, is Versailles, and the Louvre and Notre Dame and the Champs Elysees and so much more. 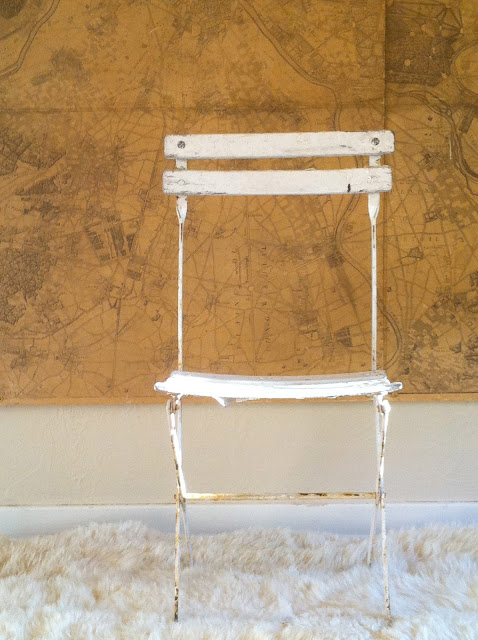 The Revolution was almost 100 years ago and now a new revolution is taking shape, too many this one is more inconceivable than the first, but to the revolutionaries it is the natural progression of things.  This is a revolution of how we see and how we express ourselves.  The impressionists, the Fauvists, the Cubists are about to take the world by storm and the foundation for those movements were formed by men and then women sitting on chairs, just like the one pictured here, in cafes along the very same streets outlined on the map on the wall.

Monet, Manet, Pissaro, Cezanne, Degas, Renoir, Seurat, Van Gogh, Gauguin, Modigliani, Matisse, Picasso and on and on.  And then Hemingway and F. Scott Fitzgerald, so much  of what we take for granted as our cultural history grew out of conversations that took place on hundreds of chairs just like this one.  Where the previous chair would have been a seat for the few this was a chair for the masses.  This chair, like it's predecessor, is wholly iconic of its time, but perfectly suited for a contemporary home. 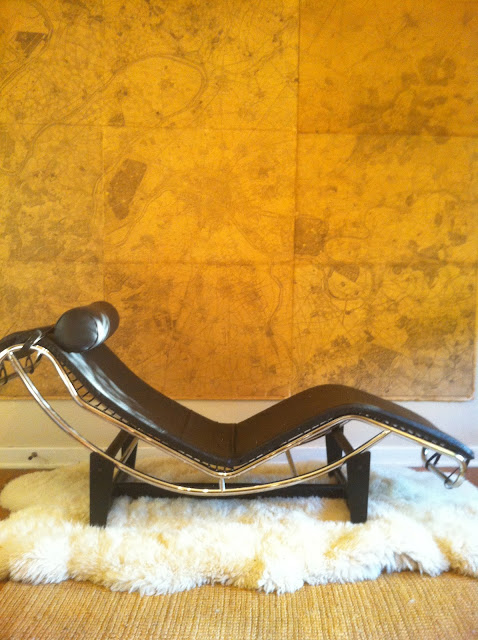 The L4 or Le Corbusier lounge chair was created in 1928 by Le Corbusier, one of the pioneers of the modern architecture movement.  Le Corbusier was born October 6, 1887 and died in 1965.  His life span nearly encompassed the whole modern movement, from painting to architecture, his life witnessed the bulk of it.  He was born 147 years after our map was created.  His goal was to bring order to the city. He strove to improve living conditions for its inhabitants.  He would look at our map and see chaos. His heart was in the right place, but his methods invited strong criticism.  At the worst, to him, you could attribute the soulless city tenement.  At the best, he deserves praise for his mastery of structural concrete and his contributions to modern furniture, having created several iconic pieces.

Of all his work, this chair is our favorite.  It came to us via, Heidi Renee Dudley, who is not French, but her middle name is.  While shopping at Goodwill Heidi came across two things that piqued her interest; this chair and an interior design book.  The chair was interesting, but maybe not a must have.   The book, she bought.  Once she got home, she sat down opened her book, and there overlooking
Central Park in a beautiful, sparsely furnished apartment was this chair.  She called us, Heather knew the chair, we dropped everything and here it is.

The modern movement was meant to create utopias for the people, but it also saw the rise of one name designers and the great majority of the authentic furniture was priced out of the reach of most people.  It is this era of furniture that we are currently most passionate about and will continue to write at length about.  Frank Gehry, is one of the most recent in the long line of architect/furniture designer of which Le Cobusier was one of the first. 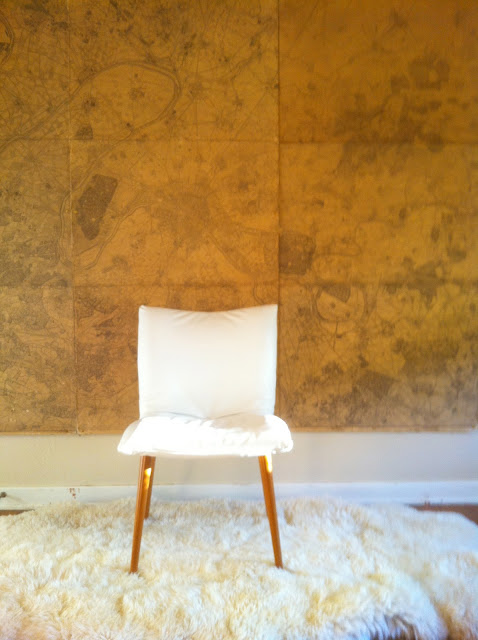 Ligne Roset 1999.  259 years after our first chair, a boundary pushing, quirky French company created one of the world's most comfortable chairs.  This is the Calin chair, designed by Pascal Mourque, it is meant to feel like a couch and it does.  If you aren't familiar with Ligne Roset look them up, they take furniture to a spot you may not be ready for or...maybe you are.

This chair was the result of a drive by.  We had not even parked, when we saw a set of four of these sitting in front of the Goodwill.  We could tell from the car, that the lines and quality were exemplary.  They were just waiting for us at $5.99 each.  A little tip, learn to recognize furniture that you don't think you will ever be able to afford.  We did have them recovered in leather, but when the chair is basically free you can do that.

That is today's tour through France.  I hope you enjoyed it!
Posted by Unknown at 4:58 PM